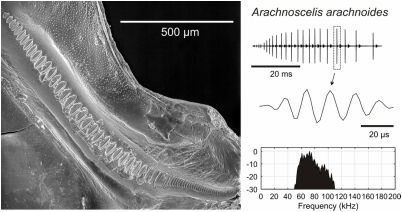 Katydids, grigs and crickets (Orthopteran insects) are well known for using acoustic communication. While crickets usually communicate using low frequency pure tone calls, many katydid species evolved a communication systems that extend well beyond the audio range. In both groups males call to attract distant females for mating, producing songs by rubbing their wings together. The frequency range exploited by crickets is relatively narrow (2-8 kHz), with a few species reaching frequency above 10 kHz. Across katydid species the range of sound frequencies is wide, spanning 1 kHz to ca 150 kHz. A major part of our research involves characterizing the morphological and mechanical adaptations on the wings supporting the evolution of high frequencies. We use modern comparative methods based on phylogenetic framework and integrate technologies such as laser Doppler Vibrometry and 3D computer models to find the biophysical mechanisms involved i the evolutionary change.

Using insects as model systems, the lab research centres in understanding the basis of ultrasonic audition. Ultrasonic audition is investigated at the mechanistic level of sensation and directionality.

In katydids and crickets the ear consists of two adjacent tympana located on the forelegs (one pair per leg), which vibrate in response to both external and internal sound pressure because they are backed by a pipe-like structure derived from the insect’s tracheal (breathing) system, called the acoustic trachea. The acoustic trachea also connects the ears with the insect’s thorax through a semicircular opening, the acoustic spiracle. In the ear of these creatures unusually the mechanoreceptors are not in direct contact with the tympana, as it is in many other acoustic insects (e.g. locusts and moths). The receptor cells lie in the tracheal tube in between the two tympana and are encapsulated in a fluid-filled cavity. Our recent work shows how air-borne vibrations reach the fluid-bathed mechanoreceptors, undergoing a transformation process analogous to that performed by the mammalian ear. In other words, the transformation of acoustic energy in the katydid ear is from air to liquid.

Our current research focuses on the study of these 'unconventional' ears using a physiological and biomechanical approach. We aim at elucidating the mechanisms by which such elaborate ears endowed with waveguides function to generate high sensitivity and directional accuracy. Using Laser Doppler Vibrometry, and Micro-CT x-ray scans of the ears we produce high-resolution (µm) large-scale computer models for finite element acoustic modelling and further applications.

The evolution of acoustic communication in fossil and extant insects

Katydid or bushcrickets (Insecta: Orthoptera: Tettigoniidae) are amongst the first terrestrial animals to have evolved acoustic communication. Today, katydids sounds extend well beyond the human audio range; yet their ancestors communicated in the audio range. Males call to attract distant females for mating, producing songs by wing stridulation. Across living katydid species, the range of sound frequencies is wide, spanning 1 kHz to ca. 150 kHz3. Males and females have evolved ears used in the contexts of both social communication and predator detection.

Singing and hearing in bushcrickets requires specialised structures and mechanisms. These structures are made of hard cuticle and can be well preserved in fossils. Acoustic organs are increasingly well-understood in extant species, which allows us to compare fossils in biomechanical, physiological and ecological contexts. Exploring the evolution of acoustic communication through the insect fossil record holds the promise of unveiling the evolution of hearing and acoustic communication in environments shared with amphibians, dinosaurs, pterosaurs, and early mammals, gaining insights into behaviours so far inaccessible from the paleontological record.

This project, carried in collaboration with the University of Bristol, holds the promise of unveiling the acoustic systems and their diversity in environments where other animals lived (e.g., maastrichtian amphibians, last dinosaurs, pterosaurs,non-neornithean birds, and early mammals). This research thus promises to gain unprecedented insight into a sensory modality thus far mostly inaccessible from the paleontological record.

Findings will help to comprehend the origins and direction of complex auditory processes in mammals and insects. The outputs will therefore target a broad audience: bio-modeller engineers, ear physiologists, and evolutionary biologists (among scientists), and the public. The core research activity of this project involves collaboration with groups in China, Brazil, USA.