Dr. Sarah Aldridge (2018-2019)
Sarah worked as the Lab’s 3D imaging specialist. She helped to build the imaging lab and developed method for mapping the bush-cricket auditory system. Sarah participated in a number of collaborations and in teaching our MBio students. 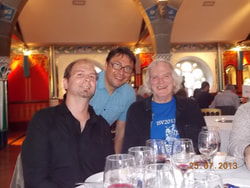 ﻿﻿Dr. Thorin Jonsson (2014-2017)﻿﻿
Dr. Jonsson joined the lab in October 2014 as research associate in the project "The Evolution of Acoustic Communication in Fossil and Extant Insects" funded by the Leverhulme Trust. He used a combination of various bioengineering and comparative biological approaches to reconstruct the sound production mechanism in extinct species of katydids and relatives, and to infer the selective pressures that produced a cochlear-like auditory organs in katydids.
Thorin has been awarded a prestigious Marie Curie Fellowship to explore further the numerical approch
to sound production by wing stridulation. And he will develop this research at the Karl‐Franzens‐University, Graz, Austria, in collaboration with the lab of Manfred Hartbauer. 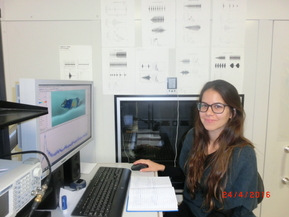 ﻿﻿Former visiting postdocs
Dr. Sandra Goutte (2016)
Dr. Goutte was a visiting researcher in the spring of 2016. She studied a group of Neotropical frogs of the genus Brachycephalus from Brazil, which lack a typical anuran tympanic ear, theoretically rendering them deaf. She published a major research paper derived from this research, in which we suggest that protection against predators conferred by their high toxicity might help to explain why calling has not yet disappeared, and that visual communication may have replaced auditory in these colourful, diurnal frogs

Dr. Fabio A. Sarria-S (2013-2017)
Fabio joined the lab in 2013 as a MPhil/PhD student under a University of Lincoln studentship, and he defended his PhD on Dec 5th, 2017. Fabio is interested in insect physiology, biomechanics and evolution of acoustic communication. His project focused on the biochemical composition of the katydid ear,   and the non-invasive in-real-time measurement of the katydid inner ear. His research approach utilized a number of techniques including, laser Doppler  vibrometry, µCT scanning, chromatography. The biochemical component of the project involved Dr. Jose González-Rodríguez expertise in this field, as second supervisor.

Dr. Benedict Chivers
Ben joined the lab in 2012 as an undergraduate project student. Then he progressed to more advanced degrees  MSc and PhD student. His PhD was sponsored by a Leverhulme grant to FMZ, and he completed all requirements for graduation in May 2019. Ben specialised in biomechanics of stridulation and used a combination of techniques for all his work in this lab, from pharmacological stimulation to Laser Doppler  Vibrometer. He was a successful stghjudent, and most of his research outputs completed as a BSc, MSc and PhD student were published in scientific journals.